Healthcare workers in the operating room are exposed to radiation during a multitude of surgical procedures as visualisation may be required in orthopaedics, neurology, urology and cardiothoracic surgery. New technologies and techniques have allowed clinicians to perform complex diagnostic and interventional procedures. Exposure to radiation in the operating room often occurs during the taking of standard x-rays and during fluoroscopy, often incorporating the use of a C-arm. END_OF_DOCUMENT_TOKEN_TO_BE_REPLACED

Medical devices/surgical instruments are used throughout the hospital to perform procedures on patients on a daily basis. These procedures are performed in theatre, the ward, maternity and doctors rooms. Contaminated devices need to be transported safely to the CSSD to be decontaminated. Contaminated devices should be transported in a manner that will ensure the safety of the staff and other patients. For this reason it is best to transport contaminated devices in closed, durable, and easy to decontaminate trolleys. It is not acceptable to transport contaminated items on open trolleys only covered with a piece of linen. Linen is not impermeable and will not contain pathogenic soils and microorganisms. END_OF_DOCUMENT_TOKEN_TO_BE_REPLACED

A needle stick (NSI) injury can be defined as an accidental skin penetration wound caused by a suture needle or a hallow bore needle.  A sharps injury (SI) is a skin penetrating wound caused by a sharp device like a scalpel, trocar, scissors, drill bit, broken glass or a saw blade. Blood and body fluid exposure occurs when a splash of these fluids comes into contact with skin or mucous membranes. Operating room nurses are continuously at risk for a needle stick or sharps injuries and blood or body fluid splashes as a result of the nature of the work they do. END_OF_DOCUMENT_TOKEN_TO_BE_REPLACED 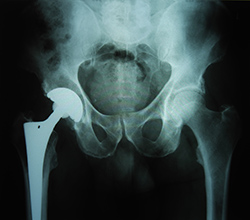 Traditional hip surgery involves making a 20-30 cm incision over the hip, the muscles are split or detached from the hip and the hip is dislocated. This is done so the surgeon can remove the ball joint and insert a metal implant into the femur. 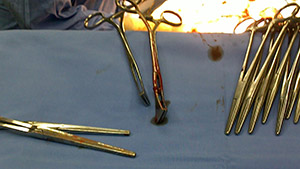 In addition to this alarming news the FDA ordered Custom Ultrasonics to recall all of its endoscope reprocessors. The recall is the FDA’s latest move to reduce the spread of antibiotic-resistant bacteria via dirty endoscopes, particularly duodenoscopes. There have been at least six outbreaks (some of which resulted in patients dying) of multidrug-resistant bacteria associated duodenoscopes, even when the proper reprocessing instructions were followed. END_OF_DOCUMENT_TOKEN_TO_BE_REPLACED 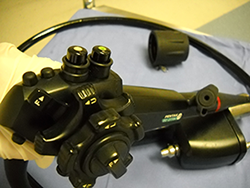 According to Mark Duro (AORN; 2016) we can improve our medical device reprocessing through education and audits. In September 2015 the CDC (Centres for Disease Control) and the FDA in America issued a health advisory urging hospitals to assess their medical device decontamination processes. The focus point of this advisory was to ensure that all staff that are reprocessing medical devices have been adequately trained in reprocessing. According to the CDC and the FDA staff should be trained when they are first employed, when new devices are purchased, when manufactures instruction are changed (as is the case with duodenoscopes) and they should have a refresher course annually. This training should be hands-on as all staff need to physically demonstrate they are able to decontaminate particular devices. Although it is critical that staff have theoretical knowledge (for example knowledge gained from the CSSD Foundation Course sponsored by SafMed) it is equally as important that staff demonstrate physical competencies. END_OF_DOCUMENT_TOKEN_TO_BE_REPLACED

We know that dealing with negative colleagues can take its toll. Use these seven strategies to better deal with negative people in your life. END_OF_DOCUMENT_TOKEN_TO_BE_REPLACED

This is a written plan designed to minimise employee exposure to blood or potentially infectious materials whilst performing their daily duties.

Those working in the operating rooms and sterilization departments are continuously exposed to blood and potentially infectious materials, thus it would seem logical to have an exposure control plan in place. END_OF_DOCUMENT_TOKEN_TO_BE_REPLACED

An invitation was extended to a variety of hospital staff to attend various events in South Africa, where SafMed unveiled the latest in their Low Temperature Sterilization range, the VPRO 60, hosted in Johannesburg, Cape Town and Durban. END_OF_DOCUMENT_TOKEN_TO_BE_REPLACED